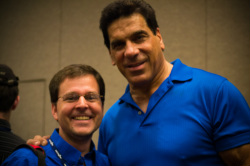 Lou Ferrigno and I
at Salt Lake Comic Con 2013
Photo by James Nguyen
6.  The Incredible Hulk – See the original Hulk. Lou Ferrigno was so huge, they did not need to CGI him to make him look like a hulk. Ferrigno is still huge. He is also the man who recruited Stan Lee to Salt Lake Comic Con in 2013. Watching this version of the Hulk won’t be as slick as watching the CGI versions, but it will be infinitely better as the TV show focuses on the journey of David Bruce Banner. There are 5 seasons on Netflix.

7.  Being Human – The Incredible Hulk only barely beat out Being Human for the 6th spot. Being Human is a complex story about three roommates who are a vampire, a werewolf and a ghost, but all they really want to be is human. The three stars, including Sam Witwer as the vampire, bring humanity to the forefront as they struggle with their other worldly problems. Sometimes, it takes monsters to show us what being human is all about. See 3 seasons on Netflix.

8.  Arrow – With heartthrob Stephen Amell and John Barrowman coming to Salt Lake Comic Con. Netflix’ lone season of Arrow is as can’t miss as the vigilante’s aim. The show seems a lot like Batman with bow, but it is still intense and complicated. Everything that a decent superhero show should be.

9.  Buffy the Vampire Slayer – Do I really have to recommend Buffy the Vampire Slayer? The most innovative show on television that lasted longer than three seasons, Joss Whedon’s tiny blonde with a stake in the vampire hunting business and in going to high school was a revelation. While Salt Lake Comic Con doesn’t (yet) have the No. 1 slayer, it is bringing Eliza Dushku to the convention. Even though Dushku was only in 20 episodes, she was the perfect foil for Sarah Michelle Gellar’s Buffy. Netflix has 7 seasons.

10. Xena: Warrior Princess – If you are going to binge watch Hercules, you might as well also binge watch its spinoff Xena. The same three stars (Sorbo, Campbell and O’Gorman) had roles in Xena, but on a far smaller scale, at least for Sorbo. Watch 6 seasons on Netflix.

Salt Lake Comic Con is not done announcing guests, and this list is sure to change when new announcements are made. So be sure to pick something out that you are going to enjoy. That way if a star is unable to make it, you won’t have wasted your time watching something you dislike.