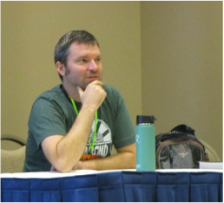 Justin Zimmerman
Justin Zimmerman has run Kickstarter projects from $1,000 to $60,000 and has never failed to get them fully funded. During his panel at the Northwest Comic Fest, Zimmerman gave some hints on how to conduct a successful campaign. One of Zimmerman’s Kickstarter projects was so well funded that he was able to overprint his comic book and every child who visits the Food Bank in Portland in 2016 will receive a copy of it.

Zimmerman warns that Kickstarter is not a way to get rich. From the funds raised, Kickstarter takes five percent, and the government counts it as income, meaning it will be taxed as such. It is important for people running the campaign to shoot for the minimum necessary to get the project funded. Some creators are concerned about other’s stealing their ideas, but for those involved in a Kickstarter campaign, it is important to get people to back the project.

“The way you do that is you show them the work,” says Zimmerman. “No one is going to take your gem of an idea.”

The most important thing for Zimmerman is that the project should be as close to done as possible when the campaign kicks off.

“Every project I’ve ever done I shipped a month early,” says Zimmerman. “The process is a contract between you and an audience you may or may not have yet.”

Rewards at different levels should be things that the creator can produce cheaply and well. They should also be things that are exclusive to the Kickstarter campaign.

The pitch should be about the benefits that the project has for the backer and for the world at large. No one wants to fund vacation or rent; they want a cool product that benefits them. The money may go to support the artist in his or her work, but that cannot be the focus of the campaign.

“The more personal you can make your connection,” says Zimmerman, the more successful the campaign will be.

Having a great video of about 60 seconds, but not more than two minutes is important. People generally tune out after a minute. People running the campaign need to reach out to everyone: ex-lovers, biker friends, the neighbor down the street.

“There’s nothing for certain,” says Zimmerman, “but there are ways you can hedge your bets.”
Read more about Northwest Comic Fest 2015