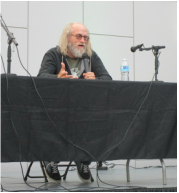 Russell Hodgkinson
Actor Russell Hodgkinson left fans hungry for more as he discussed Z Nation at Emerald Valley Comic Fest on Oct. 3, 2015. The series has been filmed mostly in Spokane, with only a couple of scenes filmed in Bremerton. The Asylum production’s first season is on Netflix; new episodes are airing on the SyFy Network. Hodkinson plays Doc on the show.

“I was intrigued by the role,” says Hodgkinson, who considers himself more of a stage actor. Who else was going to be better in the role that he felt was written for him? “So I just kind of claimed it.”

Hodgkinson says that the best part of the show is that he gets to ad lib. One of his ideas that has been incorporated is the Z Weed. The episode where the zombaby is born is “off the hook,” and the baby is “super creepy.”

Hodgkinson got his break using a new iPhone to record his audition monologue. He was up until 2 a.m. trying to get the right take. Being up that late gave him the appearance of being stoned, which was what the monologue called for. The studio cast him.

“I got buddies in L.A. who have been struggling to have a moment like I am having,” says Hodgkinson. It’s just a complete stroke of luck.