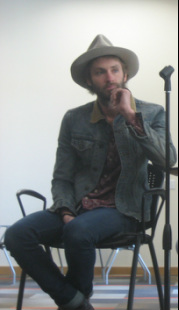 Paul McDonald at the
Songwriter's Summit
Students' Workshop
On March 21, 2014, as part of the Songwriter’s Summit in Utah, Dean Dillon, Steve Dorff and Paul McDonald spoke at Salt Lake Community College’s South City Campus. The Students’ Workshop is a precursor to the daylong event at The Depot on March 22, 2014, and the songwriters addressed challenges that the industry and individual writers face.

Performer Paul McDonald participated in American Idol Season 10, which taught McDonald things like who he wanted to work with and who he didn’t want to work with. It also taught him about who he wanted to be. It was little difficult for him to deal with the fame, especially since he had worked so hard in the years before Idol.

“It was almost like it was too much, too soon, but you totally learn,” says McDonald. “It’s a crash course.”

“When you are extremely happy, you don’t write as much,’ says Paul McDonald. “The first year [of marriage], I didn’t write as much. Now, I am away from her a bunch, so now there’s more songs about how I got to get back to her.”

“Most of the money you make is from merch and touring,” says McDonald.