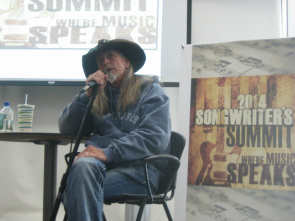 Dean Dillon at the
Songwriter's Summit Students' Workshop
On March 21, 2014, as part of the Songwriter’s Summit in Utah, Dean Dillon, Steve Dorff and Paul McDonald spoke at Salt Lake Community College’s South City Campus. The Students’ Workshop is a precursor to the daylong event at The Depot on March 22, 2014, and the songwriters addressed challenges that the industry and individual writers face.

Dillon slept with his guitar at the age of 18 he hitchhiked to Nashville. He didn’t choose to be a songwriter; songwriting chose him.

“I walked down music row and beat on doors,” says Dillon, “and got turned away a lot of times.”

When Dillon met John Schweers, “that was my break,” says Dillon. A few weeks later, he had three songs on Barbara Mandrell’s album when he was only 21 years old.

“People say, ‘All my songs are my babies.’ I can tell you right now, I got some ugly kids,” says Dillon.

Writing about something that hasn’t been written about is always a challenge. Dillon says that about four songs out of a hundred will be about something new, and those are the ones he works on the hardest.

“When you are starting out, write what you know,” says Dillon. “If you got an uncle that’s crazier than a bed bug,” write about him. Dillon writes a lot about ex-wives.

Collaboration helps with removing writer’s block. If the writer is working with someone, they need to talk it out. Writers should also talk it out if they are writing alone.

“The day I was introduced to co-writing, it was like Heaven’s gates opened,” says Dillon. “Go find you somebody and write with them. It saves a lot of frustration.”

Dillon attended a panel where someone asked if it was better to go to college first or to go to Nashville to become a songwriter. Every person on the panel said that college should be the priority. Dillon disagreed.

“Why would you go do something you don’t want to do?” asks Dillon. “A college education is invaluable, but if you believe in yourself and you are passionate – go do that.”

According to Dillon, he couldn’t write the same things that he wrote 30 years ago and expect anyone to pick the songs up.

“The hardest thing for me is staying relevant,” says Dillon. “It’s easy not to change…The next thing you know, all of the sudden, you’re not getting songs cut anymore.”

The Internet has changed music, but copyright law has not changed with it, yet. Dillon knows songwriters who have been hurt by streaming music services.

“Four and a half million spins, and I get $59? Give me a break,” says Dillon. That is why there needs to be a new copyright law that regulates the Internet.