Have you got the Captain in your Harbor cruise? 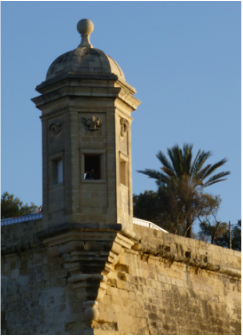 "The air has eyes, and the walls have ears"
Old Maltese saying
this watchtower has ears, eyes and a fleur-de-lys sculpted on it.
Captain Morgan Cruises’ two harbor tour in Malta provides a historic look at the harbors that include Sliema, Manoel Island and Valletta. Sights include:
Historic facts include:Captain Morgan Cruises offers a bar and restroom facilities on board. However, the Harbor Tour is short enough that these are luxuries rather than necessities. Sitting on the right side of the boat, especially near the edge or up top, allows passengers the best views. For those addicted to their cell phones and being connected electronically (without actually being connected), the boat offers free Wi-Fi. That way you can miss the sites on the cruise, making a second trip mandatory. (Better yet, leave your Internet devices at home and connect with the people around you.)

Read this for another take on the two harbor tour