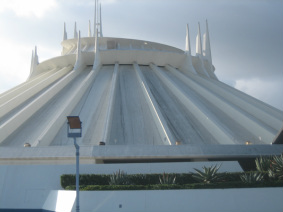 Space Mountain is a classic roller coaster. It should not be changed too much though I have heard good things about the Halloween overlay. Since space travel isn’t a regular thing anymore even for American astronauts, it can still be seen as part of the future. 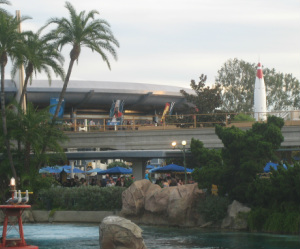 Foreground: Submarine Lagoon with Seagulls
Midground: Monorail track
Background: Innoventions and Moonliner
While the current Innoventions allows people to explore the House of Tomorrow and has Honda’s robot presentation and other quasi-future presentations that people can see at Epcot in Florida, it also houses the interactive video game area featuring XBox, the Thor meet and greet, and the Iron Man experience. Those last three are not futuristic – with the video game area a blatant attempt to market the console if not those Disney properties on the console.

It isn’t that the exhibits are bad. There was time when I would have loved to play video games all day, even though I was at Disneyland. It is that they do not speak to tomorrow.

Go back to Finding Nemo Submarine Voyage
Go back to Autopia and the Monorail
Go back to Tomorrowland is Todayland
Go forward to Captain EO and the Starcade
Skip to Star Tours, Buzz Lightyear's Astro Blasters, Astro Orbitor