Autopia and the Monorail 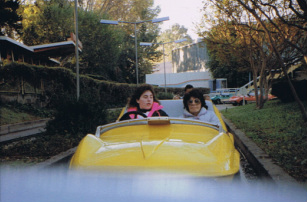 The 1989 Autopia ride
My sister and Grahms
Pretty sure my sister still drives like this
Autopia is the only Tomorrowland attraction still around from the time of the park opening. Its visions of road travel are no longer futuristic but apocalyptic. Not that Disney’s highway has Mad Max cars littering it, but the idea of gas powered vehicles clogging up the road systems spewing fossil fuel pollutants into the air is really grim.

Autopia is really popular, so this attraction is going nowhere – literally and figuratively. However, replacing the cars with electric powered vehicles and adding solar panels to the attraction could make it more futuristic and less apocalyptic.

It could be argued that the Disneyland Monorail is still futuristic. Seattle has one, but for the most part, America has eschewed public transportation and embraced the emissions and pollution of the individual vehicle. ONE CAR FOR EVERYONE OVER THE AGE OF 16! Getting a car may be the only rite of passage that Americans observe, and as such, it is important for the idea of growing up in America.

The Disneyland Monorail was opened in a ribbon cutting ceremony attended by Richard Nixon and his children in 1959. The vehicles have become sleeker, and the monorail now stops at Downtown Disney, but not much else has changed. Walt Disney and his team correctly transportation as the issue of the future, and this was one of the solutions along with Autopia and the People Mover, whose tracks can still be seen empty above the walking areas in Tomorrowland.