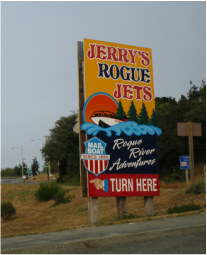 The Rogue River spans from its headwaters near Crater Lake to the Pacific Ocean at Gold Beach. Named after several tribes of Indians that were grouped together, the Rogue River has been protected in several areas with a “wild” designation. These protected areas have a limit to the number of people allowed to visit them on boat, as well as a prohibition against further development. Jerry’s Rogue Jets is the only commercial jet boat company that is allowed to go into the wild areas of the river.

The 104-mile roundtrip tour offered by Jerry’s Rogue Jets is worth the trip. Our guide Darin offered an informative historical tour that was only dry in its humor. His expert piloting skills took the boat into a small waterfall and through rocks that seemed to reach out to grab the jet boat. Darin kept the boat just out of reach. Those in the front rows and many on the right side of the boat got soaked on several occasions. Those in the middle stayed somewhat dryer. If you are going to bring a camera, be sure to bring a plastic bag to keep it dry.

And you will want to bring a camera. The river offers several scenic views as well as the opportunity to spot wildlife. On our trip, we saw a bear (or two depending on who you ask), several deer, ospreys, bald eagles, ducks, jumping fish and several tours of people heading downstream on rafts. The tour has two breaks: one in the morning at Agness where there is a country story, and the other at the Singing Springs Resort where an all-you-can-eat buffet is served for an additional fee.

Taking the whitewater trip may not be for everyone. Darin put the boat through its paces with speed, turns and at one point of in the river creating waves that went over the front of the boat. However, for those who want excitement, adventure and a great trip up the Rogue River, this is the only trip from Jerry’s Rogue Jets they should consider.