Notes from the Ioan Gruffudd panel at FanX 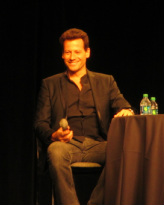 “I fell in love with acting by doing it,” says Gruffudd.
He was in a soap opera in Wales at age 11.
“You’re never sure if you enjoy it or not until you do it,” says Gruffud. “You just have to persevere” and show up if it’s in you.

“You fall in love with every character you play,” says Gruffudd. “They’re all a part of you.”

“It is a lot of fun living this life,” says Gruffudd. “My favorite feeling is between action and cut.”

Gruffudd never remembers any of his lines longer than he has to. If he shoots a scene in the morning, he forgets his lines in the evening.

“Every decision that an actor makes is based on the script, on the story,” says Gruffudd.
The moderator tried to take Gruffudd through an either/or question series. With the first question, Gruffudd has to consider carefully.
“This is my personality – intensely boring, not very quick to make a decision,” says Gruffudd.
Gruffudd finally decided zombies over vampires, Apple over PC, and vanilla over chocolate.
As Horatio Hornblower, Gruffudd had to jump from the ship into the Black Sea where they were filming. The temperature was minus four degrees, and he had to do it twice.
“It was sort of a terrifying experience,” says Gruffudd.
He was left with a ringing in the ear.
Castle and Glee made him feel like family while he was on set.
“[Singing] is part and parcel of being a Welshman,” says Gruffudd.
“It was great to play somebody who was so physical,” says Gruffud on Lancelot. “It was like being back in the back garden again with a stick… It was boys on adventure.”

“[Horrible Bosses] was an opportunity to live out one of my fantasies,” says Gruffudd.

“I thought we had something really special and unique” with Ringer, says Gruffudd.