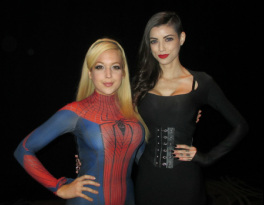 Two Super-powered cosplayers
Nicole Marie Jean and LeeAnna Vamp
at Salt Lake Comic Con 2014
“I have a neutral take. I do this for fun,” says LeeAnna Vamp on cosplay and feminism. “If you’re having a good time, you’re doing it right.”

With that simple statement, Vamp struck to the very heart of the problem. Cosplay isn’t about feminism. It’s about dressing up, creating clothes, taking on a persona, and most importantly, it’s about fun.

No one forces a cosplayer to dress in any other than he or she chooses, and that is what feminism should be about – giving women (and by extension, men) the right to choose what they want to be, how they want to dress and the consequences that would be similar to a man’s decision to choose the same thing.

If Vamp or any of the cosplayers out there had no choice, this discussion might be different. However, Vamp is clear on what she finds to be the best part about cosplay, and Nicole Marie Jean agrees with her.

“The fans’ enthusiasm – we wouldn’t be doing what we’re doing without them,” says Vamp.

Feminism isn’t about how women choose to dress or what perfume they choose to wear. Feminism is about seeing women as capable human beings. It is about making sure that every women is judge by the content of her character and the color of her handbag. It is about respecting the different ways that women choose to express themselves and ridding the U.S. of the antiquated system that pays women less, that rejects women for positions because they may choose to have a child in the middle of their careers.

In short, feminism is about equality in the workplace and in the eyes of the law. It is not about restricting women through some sort of archaic dress code. When a woman can wake up and choose what she wants to wear and feel good about that choice, the United States will have made a step forward.


Cosplay is not consent: cosplay etiquette