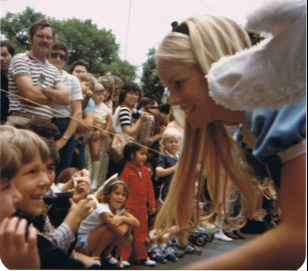 The only thing that made the wait for the parade tolerable for me was that we always had the same routine. Grab a space somewhere near the Penny Arcade on Main Street, U.S.A.

There are two important reasons for getting that spot. Mom was a single parent, and as safe as Disneyland was in the 1970s and 1980s, she still didn’t want to be far from us.

The second reason was that the space wasn’t just near the Penny Arcade. It was also near the Sunkist Citrus House – home of the best donuts ever. EVER!

The Sunkist Citrus House may have been Walt’s favorite place to squeeze orange juice for himself and the workers that happened to be on duty before the park opened, but it was my favorite place to get donuts. There was really only one donut worth considering – a honey glazed whole wheat bit of bliss for the mouth.

When the Citrus House closed in 1990, it made for a less happy experience for one little boy. Fortunately, the Penny Arcade still had its games, so we were still able to use the parade wait time as an excuse to play old-time video games and get our fortune told by Esmeralda.

Esmeralda still survives, but the Penny Arcade has lost its luster with its centerpiece of candy and a limited number of attractions from a time that only lives in history.