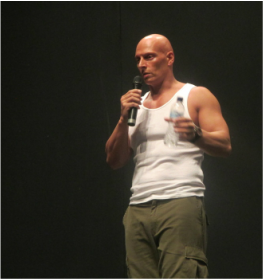 Joseph Gatt returned to his roots for Malta Comics Expo 2014. Born in England, Gatt is of Maltese descent and has visited family in the country often. Gatt made the decision to move to Los Angeles for his career.

“It’s been the best decision I ever made,” says Gatt.

“I love doing everything. I never expected to enjoy doing comedy,” says Gatt. “I like doing action stuff.”

When he got the Star Trek role, he didn’t know how to react.

“I am a big, massive Star Trek fan,” says Gatt. “I got to work on the Enterprise, and that was really exciting.”

Gatt also enjoys doing theater. He says that the fear and the adrenaline rush “makes you feel so alive.”

“You have to be comfortable with who you are first” in order to be an actor, says Gatt.

The actor has to find the truth and the honesty in a role.

“I like playing characters who are misunderstood,” says Gatt. “We all believe we’re good people even when we are doing bad things.”

Gatt’s advice for new actors is that “if you are going to do it, prepare as much as you can” and commit to it.

Gatt has worked in video games with his best known character probably being God of War’s Kratos.

Gatt has alopecia, which causes a person’s hair to fall out. His first movie was Pulse.