Maltese one-up Disney when it comes to creative fireworks 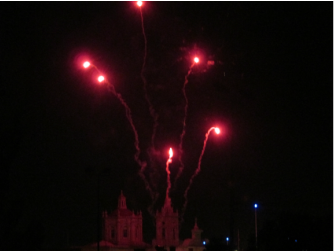 As a veteran Disney park visitor, I have seen a multitude of fireworks shows. Disney does fireworks so well that even before seeing the show at Epcot’s 30th anniversary, I was jaded to every other fireworks presentation. October 1, 2012, standing at the lagoon in the perfect spot with a beautiful woman at my side, I was done with fireworks. That presentation and its soul vibrating explosions coupled with potential and a gently sweet good night kiss ensured that firework shows would never be better.

While the Sept. 28, 2014 presentation in Malta did not reach the lofty stratosphere of that night on a cool autumn in Florida, it did come up with some amazing fireworks that I have never seen before:


The best fireworks of the night looked like they were fired from Blackbeard’s ship in the Pirates of the Caribbean while floating through a rainbow. The charges exploded in multiple colors of fire – not the sparkly points of light, but actually flames in the night sky in red, blue, yellow and orange. Skittles might have fallen from the sky in the area below these imaginative fireworks.

Maltese fireworks feature a lot of pauses, especially when they are being coordinated with music, which means that Disney has the upper hand when it comes to sheer volume. However, even with hearts, smiley faces, and that cool death star explosion in a Disney fireworks show, Malta still shows that there is room for improvement when it comes to the most creative fireworks available – both in color and design – so much so that even a jaded fireworks watcher like me has to wonder how much time I will be looking at the fireworks while I am in Malta.

(The names have been made up to protect the innocent fireworks. After seeing what the Maltese have been able to do wit circles, I fully expect Disney to put a Mickey Mouse in the sky.)