Pirates of the Caribbean: Dead Men Tell No Tales Sails on uneven keel

Pirates of the Caribbean: Dead Men Tell No Tales starts with a truly terrifying Javier Barden as Captain Salazar. Unfortunately, the film finds this mood untenable as it meanders through the great sea soon controlled by the dead. Part of it feels like Disney was trying to make a blockbuster on a shoestring budget.

The special effects are there in spades. There are some truly amazing scenes. There are some comic moments, but in the end, the movie suffers from too much of the Turner and Swann stand-ins and not enough Depp. It just couldn’t find its balance in a sweeping story that probably should have been pared down.
​
Still if you can sit through the slow parts and listen closely through the overpowering soundtrack, you should find yourself laughing a little and being in awe a little. Pirates brings the tale full circle. Though advertised as the last in the series and bringing a seemingly fundamental change to the sea itself, the last scene and the after credits scene hint that there could be another movie in the works. Temper your expectations, and you should enjoy the film. 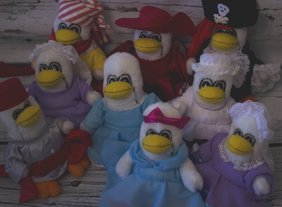 Take the Pirates of the Caribbean attraction quiz at penguin8.com.
See the top 5 Disney Pirates.
Get a Pirates themed penguin