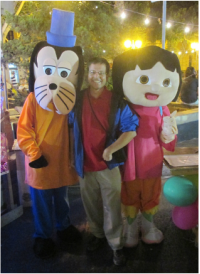 Be sure to check out the slide show and video links below.

Did someone say “chocolate festival”? Even in Maltese, I understood what was going on, and there was no way I was going to miss the opportunity to eat chocolate. The advertisement talked about new recipes and free samples and all sorts of chocolaty goodness, but the festival itself turned out to be just a good way to get out and enjoy an evening in Hamrun.

After our bus adventure getting to the festival (which you can read about here), we walked into a good old-fashioned street fair with bounce house and one good friend from my Disney days. There were plenty of street vendors selling all kinds of tchotchkes and a good assortment of vendors selling chocolate related foods. There was chocolate pizza, which was clearly a dessert. There was a hot dog with chocolate sauce, which I probably should have tried, but the hot dog part kind of threw me off. There was one booth that sampled a chocolate, caramel or white chocolate sauce. 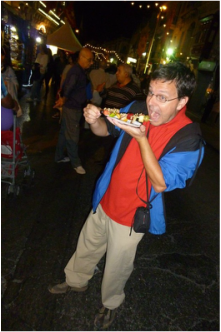 Mostly, it was crowded and filled with all kinds of desserts, which to me is a form of heaven.

I got a lay of the land, because we got there early enough that the crowd was just arriving, watching for those things that I wanted to try when we made our pass back. On our way back, I started with the buying. There was a truffle that had a decent flavor, a chocolate milkshake that is what I have come to expect from European milkshakes, thin, but it was super-chocolaty and it looked like the money was going to a good cause. I got a fruit kebab drizzled with chocolate because fruit is healthy. Then I got what I thought was a chocolate parfait but ended up being a chocolate tiramisu.

On our final pass, I stopped at a table where the man who wove reed hats, baskets and other things was selling his wares. I got a little bowl because I like supporting the local craftspeople. (I don’t know what I am going to do with the bowl.) I also missed the chocolate cheesecake booth. How did I miss it? I have no idea.

Sometimes, we need to judge things for what they are and not for our perception of what they should be or what we want them to be. This event is definitely on my list for next year, and I will get the chocolate sauce hot dog.