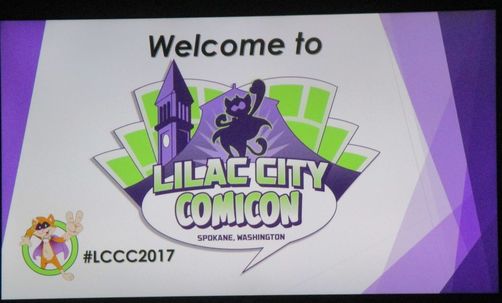 Tim Russ, who may be best known for his role on Star Trek: Voyager as Tuvok, attended Lilac City Comicon on June 3 and 4, 2017 and shared stories from his entertainment experiences with the audience.

Russ’ break for getting the Voyager part came from his involvement on Star Trek: Generations. Tuvok was supposed to be about 65 when the role was first proposed, which would have been too old for Russ to play. When Tuvok’s age was lowered, Russ became right for the part.

“Star Trek was… very beneficial to me,” says Russ. It was a positive for his career, and it was a tremendous amount of fun. The people made the series a pleasure to work on.

The Tuvok role, however, wasn’t necessarily easy to get. Russ knew that he wanted to be on a series that would run for a while. He read for Next Generation and Deep Space 9, but didn’t get roles on those shows. It took 7 years before he was able to find the Voyager part.

Russ claims that he was only pranked once early on. Kate Mulgrew hid his street clothes so he had to go home in costume. He returned the favor by posting Polaroid close-ups of his bare rear end in her trailer so they were the first things she would see in the morning.

“It was hard working with Katie,” says Russ “because she never messed anything up.” Mulgrew’s experience included daytime television, so she was really good at learning her lines. Russ always had to bring his “A” game to match Mulgrew and says that Mulgrew never dropped her lines in 7 years on the show.

Because Voyager was set in space far distant from the places where the other series took place, Russ says it gave the show greater flexibility.

“We could create our own bad guys,” says Russ. “I liked having that premise.”

Russ says that Future’s End part 1 and 2 were his favorite episodes to film. It was outside. He had a lot of laughs with Sarah Silverman and it was done in a chill and easy-going fashion.

Russ is involved in other creative endeavors including a band whose music is available online.

Other notes:
“I worked with Jason Alexander,” says Russ, and because of all the make-up, “I never saw him.”
“What Roddenberry was trying to do is tell stories about now,” says Russ about Star Trek. Roddenberry dressed up human stories in aliens and the future.
“The Doctor (played by Robert Picardo) was always my favorite (character),” says Russ.