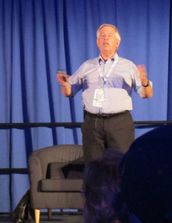 Bill Cotter
Disney Historian Bill Cotter presented “’Out of the Night, When the Full Moon is Bright’ – 60 years of the horseman known as Zorro” on July 14, 2017 at the D23 Expo. Zorro as a character was first featured in a dime novel in 1919. Douglas Fairbanks and Tyrone Powers were two stars that portrayed the character in film. When Walt Disney bought the rights to the character, Roy told him the company wasn’t going to do it. Walt went ahead and started collecting props anyway.

For better or worse, the project was shelved when Walt found another way to pay for Disneyland. With the "Mickey Mouse Club" and the Disneyland anthology series starting up, "Zorro" would have to wait until ABC decided it wanted another series from Walt. The Zorro set was Disney’s first back lot and had several details, like a period authentic outdoor oven, that were never featured in story lines but provided atmosphere.

Walt needed a star for his series. Hugh O’Brien, Dennis Weaver and Jack Kelly were linked to the series but never actually screen tested for the role. Davy Crockett’s success in merchandising meant that everyone wanted a Fess Parker type deal when coming to the Disney production, and they wanted the part because of that type of deal. Tony Russo came closest, but ultimately Guy Williams was chosen.

Guy Williams had two failings: he could not sing, and he could not ride a horse though, like every actor, he said he could. Nothing could help Williams with the singing, but he did practice the horse riding. Four horses played the part of Tornado – each had its own special ability.

Disney added romance to the story to allow it to appeal more to adults. Unfortunately, the main demographic of teenage boys didn’t like the romantic parts, so that went away later in the series. Annette Funicello got a guest role on the show as a birthday gift; Walt knew she had a crush on Williams.

The series used historical information for added realism and addressed controversial subjects. The voice of Fred Flintstone tried out for the part of Sergeant Garcia and the “Z” is the most famous trademark of any TV series. After an argument with ABC, Walt canceled the show at the height of its popularity.
​
Cotter started working for Disney in 1976, and because he had access to the Disney library of shows, he binge-watched them before there was a word for it.