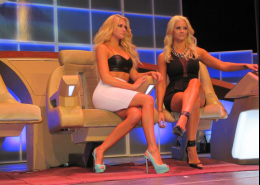 Barbie Blank in the captain's chair.
Maryse Ouellett next to her.
Both on the bridge of the Enterprise.
Barbie Blank enjoys performing as a wrestler. She just has fun with it.

“I just love being a character,” says Maryse Ouellet. 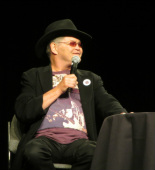 “[The Monkees] was 45 years of stuff,” says Micky Dolenz.

“These things sort of have a natural lifespan,” says Dolenz of sitcoms like The Monkees.

Dean Jeffries made the Monkeemobile.

“The movie (Head) was sort of deconstructionist,” says Dolenz. 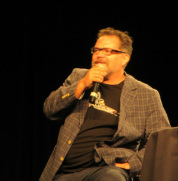 “It feels very Canadian to me,” says Aaron Douglas about Salt Lake City.

“I got George Lucas to watch Battlestar Galactica,” says Douglas.

[The original series] was like Star Wars on TV every week,” says Douglas.

“They’re kind of different things,” says Douglas of the new and original series, who loves both series. He does point out that the new series bought him a new house.

“Somebody said if you like Buffy, you’ll like Veronica Mars,” says Eric James Stone. He liked it so much that he backed the Kickstarter.

The whole-season mystery arc was well done according to Stone.

“It had been tried before on TV, says Stone. “It was perfectly set up during the start of the season.”

Changing the lead from a male role to a female role “was a stunning choice,” says Robert Defendi.

Mette Ivie Harrison liked the way that teenagers were portrayed on the show. Teens are not children; they are young adults.

In the movie when Logan takes off his shirt…

“Someone told [Rob Thomas] that that had to happen,” says Harrison.

On YouTube:
J.R. Johansson talks about why she likes Veronica Mars

“This is still in its infancy stage,” says Serling.

If two of the five editorial board members like the submission, it will be published.

“My dad really loved being with writers,” says Serling.

“He [Rod Serling] was so traumatized by the war that he realized he needed to write,” says Serling.
Notes from “Film Criticism 101”

To be a film critic, you have to verbalize what you don’t like about the film, you can’t just say that it sucked.

Napoleon Dynamite broke Netflix according to Means. There was just no way that the computer could classify it because people either liked it or hated it and the algorithm couldn’t figure out who would like it or not.

“It has to be a sure thing. That’s the problem with Hollywood now,” says Dan Metcalf.

“Salt Lake is very lucky because we have the Broadway and the Tower,” says Jeff Vice.