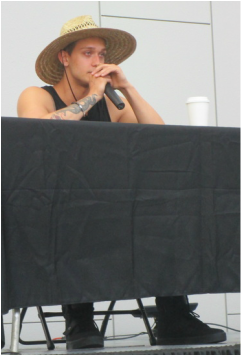 Cody Saintgnue
Everyone in the audience for Cody Saintgnue’s panel at Emerald Valley Comic Fest on Oct. 4, 2015 got to ask Saintgnue at least one question. Fans of MTV’s Teen Wolf series were giggly enough to earn nicknames, like Giggle 1 and Giggle 2, from the actor as he went from person to person asking each what question he or she had for Saintgnue.

“I want to play a superhero and a supervillain – both spectrums,” says Saintgnue. “I think villains are fun to play.” His dream role would be Venom.

Saintgnue says that his view of people is important to keeping him grounded. It is important to realize that some people may be lost or confused, but people have good hearts and mean well.

“When you come from such a good place,” says Saintgnue, “you’ll feel better.”

Saintgnue is impressed with the work that Kenzie Hall and her charity organization, Brat Pack 11, are doing. The charity works to fulfill the wishes of children of wounded or fallen soldiers. Hall founded the charity after watching her friends suffer after the loss of their father in Afghanistan.

“She’s a superstar. She’s an old soul,” says Saintgnue of Hall.
​
Among his hobbies, Saintgnue enjoys sports and cooking. His favorite thing to barbeque is a bacon-wrapped filet mignon with some peppers and jalapenos. Saintgnue’s latest works include the indie horror film Dante’s Copse and The Thunderers.