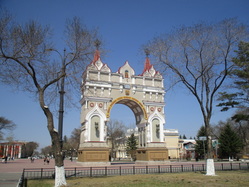 The Triumphal Arc
In much the same way that the U.S. was explored and settled from East to West, Russia was explored and settled from West to East. Nickolai Nikolaevich Muravjov-Amursk founded Blagoveshchensk (Blago) in 1851, making it younger than many cities in the Western U.S. This youthfulness stands in stark contrast to the more historic cities of Western Europe and of Moscow and St. Petersburg. It is also enhanced by the destruction of monuments that took place during the Soviet era.

Blago’s most iconic structure, the Triumphal Arc, is a reproduction, and the city is currently in the process of revitalizing its river walk area on the Amur to create its own Golden Mile, light on the shops and heavy on the walking. This project is particular important for luring Chinese tourist to the Blago side of the river. This leaves much of the rest of Blago in a fog of mystery jumbled with a healthy dose of Soviet-era architecture, giant pipes above ground and more stores than a town of this size should be able to support financially.

Blago has at least 2 first rate attractions, aside from the aforementioned river walk and Triumphal Arc. The Amur Regional Museum is a classy set up that includes natural history stuffed animals, a few prehistoric bones and a lot of the history of the people of the region – both native and Russian. It has exhibits that are technologically advanced, and ones that are related to the most recent era of history that may also be the most interesting.

The tiny Film Museum is a gem, especially since the woman who runs it is so knowledgeable about the subject. While the exhibits in the current location are limited to one room, for film buffs with a minimum of Russian, the tour was easily understood. Located near the riverfront, the museum is located in a building that also hosts a cinema. A perfect trip would be a visit to the museum followed by a visit to the movie theater to see a show.

Beyond that, Blago has a couple of amusement parks with rides mostly for children and from 5- to 7D films. There are several shooting galleries where bullets are 10 rubles each, and there are several different monuments that are more or less easy to find. The monument to the First Suitcase Trader and the First Ice Cream vendor are interesting, especially in light of the communist rule. (More after the ad.)
And then there are the things that a tourist, especially one that doesn’t speak Russian, has to search for. The Dinosaur Cemetery took two days to find, even though we were in the area on the first day. One wrong lack-of-turn and we ended up stuck in the mud and getting a tractor to help pull our vehicle out. A great experience because the people were so nice about it, but still a little frustrating. When we finally found the Cemetery, it wasn’t because there were any signs. One of our party was lucky enough to spot the tail of a dinosaur statue and the other person correlated the gray wall and green door with a video we had seen the evening before. Perhaps the lack of signs is due to the fact that the Dinosaur Cemetery is closed to the public, and it has no funding to continue research. This is too bad as this is exactly the kind of thing that could attract tourists to the region. Apparently, there is one dinosaur skeleton on display in the Blago area, but our attempt to track it down ended with a closed building that may or may not have been the correct place to be.

Just outside of Blago is a beautiful monument that celebrates the first Cossacks in the region. However, finding it can be a problem because, again, the road isn’t marked. Many of the people that live in Blago and the area near the monument confuse it with a monument marking the place where Muravjov-Amursk stayed on his arrival in the region. One person knew where the monument was and directed us to it but said that there was only a cross at the area, so it wouldn’t be worth going to. The cross is above a nice parking area and at the start of the steps that lead to the monument. Once at the top, there is a nice panoramic view of the region. The monument also seems to be rigged with lighting and a sound system. It would be interesting to see what those were used for considering how far out of the way this monument actually is.
​
Legend has it that there are squirrels in the May Day Park that are just waiting to be fed. We didn’t find them and our hazel nuts had to be roasted and eaten at home… Blagoveshchensk could be something special. All it would take is a concerted effort on the art of the government and the city’s population to clean up the most used public areas and to harvest the natural resources of the area, like the Dinosaur Cemetery, to make them palatable to the tourist. The roads are another story, but with the proper spin, they could be used to highlight the Wild East feel of this border town.