The difference between Gender and Sex 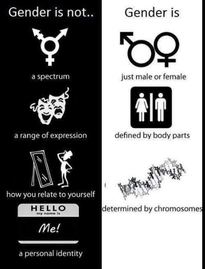 Why this meme is stupid
Sex is the biology. The stuff on the right. The answer to the question on forms that you fill out for the government. They don't ask you what your gender is. They ask for your sex. (Merriam Webster: either of the two major forms of individuals that occur in many species and that are distinguished respectively as female or male especially on the basis of their reproductive organs and structures.) Even sex isn't a perfect black and white, male or female, way to describe everyone because some people are born both male and female: hermaphrodite.

Gender is the expression of the biology. Manly men being manly aren't expressing their sex. They are expressing their gender as seen through the eyes of America culture. Some people don't want to be trapped in the gender roles as laid out by society. Some men prefer to cry and show good emotions, care for their children and hate working on their cars. Some women want to be doctors and police officers and kick butt in an MMA ring. In this case, the box on the left is exactly what gender is. It's part of the reason English has 2 words. (Merriam Webster: the behavioral, cultural, or psychological traits typically associated with one sex)

Neither of these things take into account the fact that sex and gender are determined by a complex mix of chemicals in the body. Someone might have a penis and also have elevated levels of estrogen ("the female hormone").

Unfortunately, this post really doesn't have to do with the actual question at hand. Why does it matter if a man wants to be a woman or vice versa? Unless he, she, or whatever pronoun that person prefers, is doing something to specifically harass you, the expression of that person's gender has no power over the expression of your gender. Let them be who they want, and hopefully, they can be happier that way.