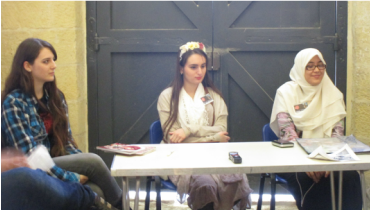 Giulia Della Ciana (Left), Heba Rena Yassin, Asia Alfasi
At Malta Comic Con 2015, Manga enthusiasts and creators talked about the New Manga and what it meant to be a creator of Manga who wasn’t Japanese. Giulia Della Ciana from Italy, Heba Rena Yassin from Cyprus and Asia Alfasi from Libya and the UK talked about their experiences as Manga creators in Europe.

“We grew up with a lot of Manga” in Malta, says Alfasi. “I started drawing Manga.” Alfasi uses the language of Manga to draw Arab characters. “You can tell stories that not just entertain but inform.” Manga has a cinematic approach. “It feels like you are watching a movie.” Alfasi says that Manga is a growing movement in the UK. It has a broad appeal because it caters to everyone.

“Gender doesn’t matter,” says Yassin. “Why let your gender define what you can draw?”

Yassin grew up watching Pokemon, Digimon and Sailor Moon. She didn’t even know that they were Japanese show because they were translated into Greek.

“You get influenced by the style; you can’t help but fall in love with it,” says Yassin.

Ciana had similar experiences to the other panelists. Ciana took a specific course in anime drawing and started self-publishing. Though Italians generally believe that Manga can only be made by the Japanese, Ciana fuses the Japanese style with Italian ambiance.

Drawing in the shoujo style, Ciana says that it is more about the story than the style. The debate in Italy is whether or not something drawn in the Manga style should still be called a comic, but manga is just a word that happens to describe her style. Ciana says that the Japanese expect Manga produced in Europe to not take place in Japan.
Ciana’s favorite TV show is Full Metal Alchemist. Her comic Butterfly Effect sold out at Malta Comic Con 2015.