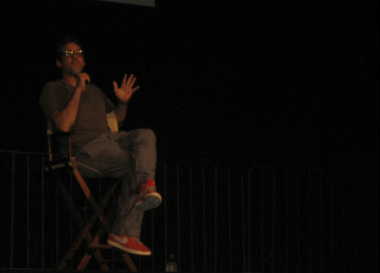 Brendon said that someone reminded him that he had been in Utah before.

“Snow terrifies me,” says Brendon. “I have been in Utah before and it almost killed me.”

When Brendon got on skis, he thought he did well on the bunny hill, especially with plowing. He was warned that it hadn’t snowed in a long time – three days. As a kid from Southern California, he thought three days was relatively recently, so he decided to go up the mountain.

That’s when he found out that three days meant that the snow had turned to ice. He was no longer able to plow his way down the mountain, and ended up face planting at about “40 miles per hour.” Ski patrol arrived to help, and he took the toboggan down.

Who did Brendon enjoy working with?

Brendon enjoyed working with John Ritter on Buffy the Vampire Slayer. (See Nicholas Brendon brings the funny and hope to ‘Buffy’ fans.) His mom called him to tell him that John Ritter had died.

“God bless my mom, but she likes to give bad news,” says Brendon. 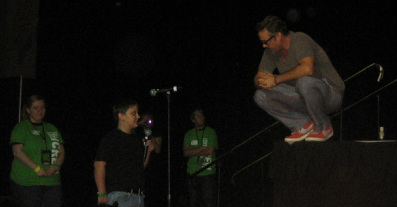 Nicholas Brendon talks to a fan at Salt Lake Comic Con 2013
Being a comic book character is awesome.

“I can’t tell you how much sex I had because I’m a comic book character,” says Brendon.

Relationships should typically have some conversation mixed in with the sex some time.

“If your friends don’t hire you, who’s going to hire you,” says Brendon.

Brendon has done Criminal Minds, and movies like Coherence, and Big Gay Love.
Brendon says that aspiring actors should “just have fun.”

“Xander was Joss. I was Xander. Ergo, I was Joss,” says Brendon. He finished by saying that Joss is god,and that made Brendon god, so the person who asked the question should kneel.

The person who asked the question said that he would, but he was too nervous to do so.

“When I lost an eye, I wasn’t warned about that,” says Brendon. That was Joss’ way of saying that he was in charge.

“The top three were always untouchable,” says Brendon about Buffy the Vampire Slayer.

According to Brendon, Joss is always thinking of ways to break the audiences’ hearts and then give them back and then take them away again.

“There’s nothing that I don’t like about them (conventions),” says Brendon.

Brendon says that he hugs everyone.