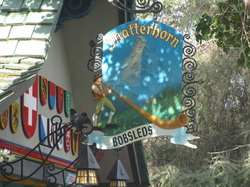 In the past when cast members were asked which side of the Matterhorn gave the better ride, they gave a noncommittal answer. Both rides were the same since the tracks run mostly parallel. The problem is that the tracks run “mostly” parallel, which means that they have some variation and provide different ride outcomes.

When facing the Matterhorn Chateau, it is the left side that provides the most thrills and chills for the money. Whereas the right side starts in a descent, the left side ascends which means the rest of the ride is spent going faster and in the end getting wetter in the pool of water designed to slow the cars down as well as provide a minor splash element.

Of course, the Matterhorn has received some upgrades to its show for Disneyland’s 60th anniversary. The new Yeti is frightening as it reaches out to grab sled riders. A crash staged in the ride seems to be of both bobsleds and skyway carriages. The Yeti roar in the darkness and its appearance behind the ice (in a projection effect) are perhaps the scariest additions to this classic.

The Matterhorn was opened in 1959 and is the first roller coaster to use a tubular steel track. Built to 1/100 scale, the Matterhorn is a replica of the mountain of the same name in Switzerland, and it is tied to the Disney movie Third Man on the Mountain. Mountain climbers will sometimes scale the sides of the Matterhorn, and the mountain catches fire in Disneyland’s new fireworks show “Disneyland Forever.” The Matterhorn houses half a basketball court near its top.

​Take our poll below!