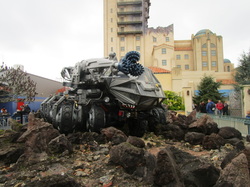 Prop from Armageddon
Armageddon: The Special Effects – Based on the Bruce Willis space going spectacular, this attraction has a recorded Michael Clarke Duncan and a live Disney cast member introduce the set up. Everyone is boarding the space station, and Lev Andropov is waiting for the extras arrival. The audience is taken through a series of pantomimed feelings and let loose on the space station. Done in the round, fire, water and space rocks crash into the audience. Alarms and the appropriate words from Andropov without being to saucy make the situation corny and fun in a once-in-a-while kind of way. Armageddon was released in 1998, and this style attraction exists (or existed) in Florida under another name.

Rock ‘n’ Roller Coaster starring Aerosmith – The introduction to this form of the ride is not as elaborate as the one in Florida. Aerosmith members are gathered around a model of the ride and are discussing it. Then it is off to the thrills of speed, g-forces, loops and corkscrews.
​
Moteurs… Action! Stunt Show Spectacular featuring Lightning McQueen – This is the original show that was imported to Florida. Lightning McQueen was added later because of the popularity of the Cars movie, but Disneyland Paris had this attraction first.