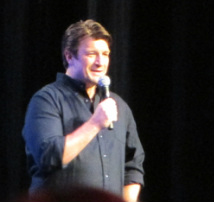 Nathan Fillion played Dungeons and Dragons in the 7th grade.

“It took so long. My favorite part of Dungeons and Dragons was rolling the dice,” says Fillion, “and drawing my character.”

“My practice is never start playing a game you know you can’t win,” says Fillion on whether or not he would play a board game with Wil Wheaton.

Fillion’s first film was Saving Private Ryan. He was 25 years old at the time and had never traveled. There were a lot of firsts. He was very excited.

The actors went through a boot camp run by an ex-military consultant. After a couple of weeks, the cast decided that the boot camp was a terrible idea and they didn’t want to do it anymore. They took a vote.

“The only person who voted to stay was Tom Hanks,” says Fillion. Boot camp continued with everyone on board.

“Castle rarely touches anything because I don’t like putting on the gloves,” says Fillion.

“Never ever endeavor to find out where a celebrity lives,” says Fillion. “There is nothing you can say that doesn’t say ‘I’m crazy, and I know where you live.’”

“I just offed one of the items on my bucket list last night,” says Fillion. He had dinner with everyone, save one person, from Star Trek: The Next Generation. He geeked out over it, but kept reminding himself to “Stay cool.”

His TV bucket list includes landing a plane, playing his own double and walking away from an explosion. He was able to check of defusing a bomb recently.


Read about Fillion taking on the Whedonverse