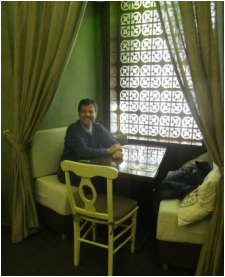 My last trip to Mdina I foolishly took the advice of my tour book and brought a picnic. As we walked through the silent city at night after having consumed the picnic foods, we saw restaurant after restaurant that would have surely delivered better food than any picnic I could have dreamed up with my current resources.

Fortunately, I was able to make it back to Mdina, and our first stop was Theos, a restaurant that specializes in Mediterranean cuisine. We opted for the prix fixe menu, which included a choice of hummus or garlic dip, and three different entrée options. At 15 Euros, the prix fixe was a bargain, especially because of the variety it offered.

The first course was a superb garlic dip with fresh, warm pita bread. The sharpness of the garlic was expertly offset with the yogurt. The flavor was enhanced by the pita. Everything worked in together to create a heavenly flow for the mouth.

The four appetizers included a bruschetta, two types of fritters fritter, and crispy fried chicken wing. The wing and the fritters were the highlight of the appetizers. The bruschetta paled only because I am not a seafood fan. The vegetable fritter was the best thing on the plate.

For dinner, I chose the stuffed pepper. The rice was exceptionally flavored and provided a beautiful texture. The pine nuts helped to round out the pepper. The potatoes that came with the plate were also tasty and firm.

With dinner being inexpensive and good, Theos also provided a great atmosphere. We chose the alcove with the trapezoidal table. While I am sure that the space normally provides a romantic place for a date, we chose it because it was definitely different than sitting at a normal table. The light fixture and the panel at the back of the alcove provided a beautiful compliment to the overall feel of the restaurant.