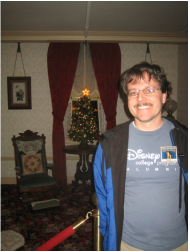 A peek inside Walt's apartment
In years past, participants were able to ride on the Lily Belle caboose and visited the Enchanted Tiki Room, where everyone in the group got to play with an audio-animatronic flower and one tour participant got to start the show.

This year, the tour received a surprising upgrade. The group got to visit Walt’s apartment above the Fire Station. This 500 square foot living space was where Walt and his family spent nights at Disneyland.

To get to the apartment, guests had to pass through the backstage area. As per Disney policy, photos of a general sort in the backstage area were not allowed, but each participant did get to have one photo taken with the Christmas tree in the window.

The room itself carries a strong floral motif that Lillian Disney helped to inspire. Its shelves are filled with antiques, and the two couches pull out into beds. The kitchen area contains a sink, cupboards with dishes, and a sandwich griller. (Walt liked grilled cheese.) The walls have photos of Walt and his family.

There is a door that leads to the balcony. The bathroom is through a walk-in closet and features a shower with four shower heads. There are two music machines – one an old Edison player, for which they found about 28 wax tubes. Only a few tubes were on display.

Apparently, Walt loved orange juice. So he would go down to the Sunkist Citrus House in the morning and make fresh squeezed orange juice before the park opened. Workers report seeing a man walking down Main Street shouting to the men that he “had the key” and they should come get some orange juice.

The staff at the Sunkist decided to get Walt his own juicer and stock his fridge in the Fire House with oranges. Yet, Walt continued to go down Main Street in the morning. Walt complained that it didn’t taste the same from the juicer in the apartment, so he continued to go down Main Street. He liked to use the industrial juicer. (It also gave him a chance to be in his park.)

The apartment once had the fire pole that led to the Fire House. However, a young guest climbed it once and found himself in Walt's apartment, and the fire pole was blocked up.

Mouseketeer Sharon visited the Disney family in the apartment once. She was talking to Walt about his park and tears came to his eyes. That is when she realized that Walt was living his dream.