The elevator at Club 33
Walt wanted a quiet place to host dignitaries and the like. He was an icon in his own time, and fans would ask him for his autograph every time he was in the park. To remedy the situation and give his personal guests some privacy, he created Club 33. Named for the its address on Royal Street in the park, Club 33 is an exclusive members only dining area and the only place in Disneyland proper that serves alcohol.

The elevator is designed after an elevator that Walt saw when he was in Paris. The person who owned the elevator wouldn’t sell, so Walt sent his people over to get the exact dimensions and duplicated it for Club 33.

Walt's original plan for Club 33 was to have taxidermy animals interact with guests. He placed microphones in the chandeliers to hear the conversations. This never really took off, but their is a buzzard that is left over from the concept in one of the two dining rooms. 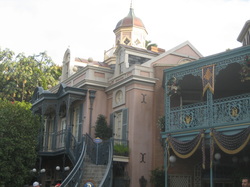 The Dream Suite in New Orleans Square
Walt was also looking to expand his apartment. The new living space would have been located above the Pirates of the Caribbean. It was never finished before Walt’s death, and at one point is was converted into the Disney Gallery, which is now located in the Opera House on Main Street, U.S.A.

The apartment is now the Disney Dream Suite. The initials of Walt and Roy are still seen in the iron work on the balcony.

The Court of Angels is currently (2013) under construction. There is an angel that looks down from the balcony above the entrance to the court.

One year when the Disneyland Hotel was taking down its Christmas tree, the crew found an angel ornament that did not belong to the park on the back of the tree. There was note inside of it that explained that a family was commemorating their child who had died of a long term disease. Disneyland was a place that he could come to and just be a child.

The tree is decorated with an angel every year, and angels throughout the park represent those children who have enjoyed the park as an escape from the day-to-day dealings with illness.
Tomorrowland’s only remaining original attraction is the Autopia. The Carrousel of Progress is now Innoventions and home to Thor’s Meet and Greet, an Iron Man exhibit, and the House of Tomorrow.

Guests on the tour also got to experience Great Moments with Mr. Lincoln. The first human audio-animatronic, Lincoln wowed audiences at the 1964 World’s Fair, even though he had some issues during his first few performances.

Walt was a big fan of Lincoln. Every President’s Day when he was growing up, he would go to the school dressed as Lincoln and give the Gettysburg address. It was so well done that the principal took him to other classes to deliver the speech.
Continue on A Walk in Walt's Footsteps and to Walt's Apartment